Doris Mae Burmeister Sanford was born in Jacksonville, Illinois, on July 23, 1924, the daughter of Russell Allen Burmeister and Violet Evelyn Vieira Burmeister. She grew up in Detroit, Michigan, and graduated from the American Academy of Dramatic Arts in New York City. Both she and her husband were professionally involved with radio and television.

On retirement, Mrs. Sanford began to pursue research into her family tree. Her mother, Violet Vieira Burmeister, was the granddaughter of Emmanuel and Justina De Freitas, Portuguese immigrants who moved to Jacksonville in order to escape religious persecution. Converted Presbyterians on the island of Madeira suffered a period of persecution at the hands of the Catholic majority during the late 1830s and 1840s. To escape the situation, a group of converts, including Emmanuel and Justina De Freitas and their children, left Madeira and went to the island of Trinidad. Finding life less than desirable there, the converts moved to Jacksonville and Springfield, Illinois.

Emmanuel and Justina De Freitas had eleven children, eight of whom were alive in 1910. Frank, the oldest child, married Anna and they had six children - Nelson, Nettie, Idelle, Franklin, Gilbert, and Annabel. Daughter Pauline married Harold McLaughlin. Daughter Elizabeth married William Vieira and their daughter, Violet, was Doris Sanford's mother. Emmanuel and Justina's fourth child, Nettie, married Arthur Smith and had a son, Carl. Daughter Evaline Harrison and son David were next in the birth order. George followed, marrying Irene and having three children- Charles, Russell, and Marie. The youngest son, Thomas married Sarah Nunes and they had a son, Loren Thomas.

Mrs. Sanford put a great deal of effort into her research, and became interested in the entire group of immigrants from Madeira, not only her ancestors. She had intended to write a book based on her research, but her plans were cut short by her death in 1988.

The finding aid for the Doris M. Sanford Collection, 1846-1988 at the Abraham Lincoln Presidential Library and Museum may be found at http://alplm-cdi.com/chroniclingillinois/items/show/552.

Photographs in the collection include De Freitas family portraits. 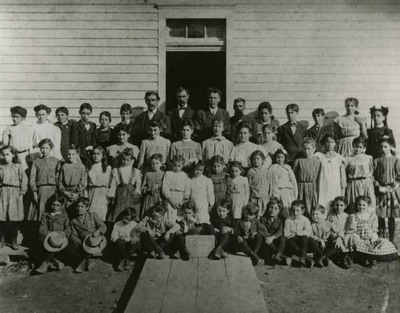 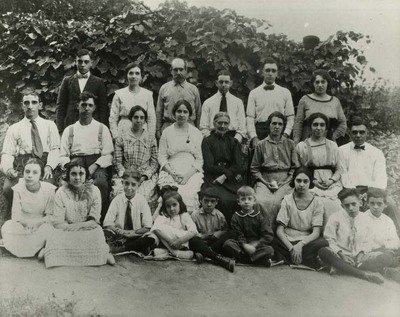 Justina De Freitas and Her Children, Children-in-law, and Grandchildren

Justina De Freitas and Her Children, Children-in-law, and Grandchildren 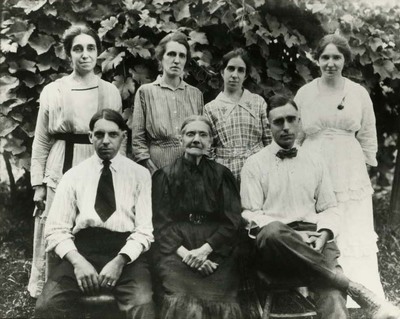 Justina De Freitas and Six of Her Children

Justina De Freitas and Six of Her Children