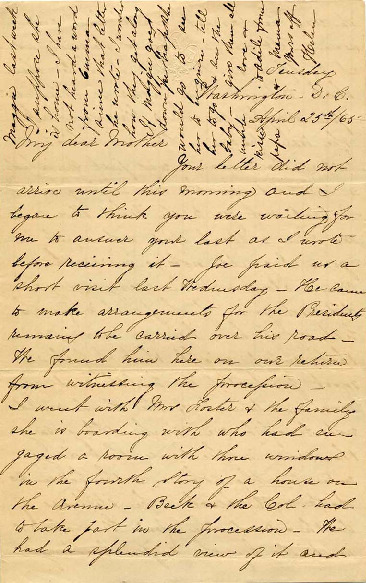 In the wake of Lincoln's assassination, Helen DuBarry writes her mother about witnessing Lincoln's funeral procession in Washington, D.C.

Your letter did not arrive until this morning and I began to think you were waiting for me to answer your last as I wrote before receiving it. Joe paid us a short visit last Wednesday. He came to make arrangements for the President's remains to be carried over his road. We found him here on our return from witnessing the procession.

I went with Mrs Foster & the family she is boarding with who had engaged a room with three windows in the fourth Story of a house on the Avenue. Beck & the Col. had to take part in the procession. We had a splendid view of it and

it was the largest one I had ever seen. It was two hours passing us. I suppose N. Y. will do better than that today. Did Father go to the city? You might go over to Garrison's as the train passes. The car which carries the remains was just finished & intended for his use-living. I did not go to the White House to see him. Beck did not want to go & I would not go in such a crowd alone. I am very sorry I did not go. perhaps it is for the best as I have been as nervous since that awful night that I feel almost prostrated in health and any more excitement of the kind would not benefit me much. They say the scene in the house that day were terribly solemn. The house so dark with black. The stillness of death---and the four Generals as sentinels by the corpse looking

solemn & sad---all made the people realize more forcibly what a dreadful thing had happened. Poor Mrs Lincoln has not left her bed since he died & they had to close the doors a half hour before the appointed time as the steady tramp tramp of the people was making her wild so that she did not recognize her own son. To think that his wife's presence did not stay the murderers hand. It is thought by a few who pretend to know that Booth is surely caught and the Authority don't wish it known. There is a great deal known that is not allowed to be published. There is a family of Greenes under arrest for having kept him all night on Friday. They are a good family here & live by the Potomac.

Joe staid all night with us and left early the next morning. I have not heard from Carrie in

some time. There is an advertised letter for me in the P. O---which they say they are not ready to deliver yet. It is very funny. They must be examining letters. Has Mrs De Janon got to W. P. yet? I see Lou florishing about here with Officers. I saw her with one at church Sunday. We think of going next Sunday to Alexandria to attend the church that Genl Washington attended. It will be an interesting trip. Col Foster gave up two bonds of the Confederate loan which he brought up from Charleston. I have finished my green dress and it looks good as new. I am on the pink plaid pineapple---putting a lining in the skirt & flouncing it. I am rather glad the trunk holds off as there is enough work here to keep me busy. You need not send the claret silk as I shall not need it before Fall. If you write as soon as you get this it will bring the letters all right again. I had a letter from

Maggie last week. I suppose she is home. I have not heard a word from Emma since that letter he wrote. I wonder how they got along. If Maggie goes down perhaps she would go to see her to enquire. tell her to go & see the baby. give them all much love & kisses to Adile from papa & Mama.