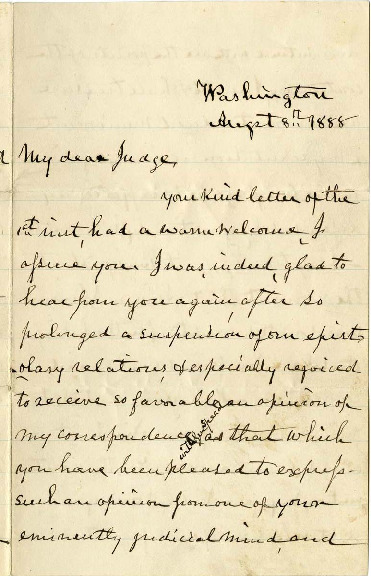 Joseph Holt corresponds with J.A. Bingham regarding the trial of the conspirators and petition for clemency for Mrs. Surratt.

Your kind letter of the 1st inst, had a warm welcome I assure you. I was, indeed, glad to hear from you again after so prolonged a suspension of our epistolary relations, & especially rejoiced to receive so favorable an opinion of my correspondence with Genl Speed and that which you have been pleased to express. Such an opinion from one of your eminently judicial mind, and

acquaintance with all the points of this controversy, I accept & shall treasure up as a most valued muniment of my reputation, so cruelly assailed in the long ago, but so effectively defended by your timely intervention. I say timely, for it was just at the moment, that Andrew Johnson, was doubtless exulting in the belief, that he - his friend Genl Speed cooperating - had given a stab to my character from which it could never recover. For this intervention, my dear Judge, I owe you "a debt immense of endless gratitude".

I have a joyful belief, that so long as God is on his throne, angelic hands will be found to roll away the stone from the portals of the sepulchre in which men & devils have entombed the truth. That Genl Speed, in a room adjoining to that in which I held my interview with Prest Johnson, & through a communicating door that chanced to be ajar, heard every word spoken by the President & myself, while he was considering the record of the trial of the assassins, & the petition for clemency in the case of Mrs Surratt, I entertain no doubt - indeed I have satisfactory

reasons for an absolutely complete conviction to that effect. His subsequent conduct towards me, so wholly indefensible, can, I think be explained only on the theory, that he had under influences I shrink from discussing, in effect, pledged himself to Andrew Johnson, to suppress the truth in his (Johnson's) interest, heedless of possible consequences to himself & to me. That suppression was certainly inflexibly maintained in life & in death.

This whole affair has been for me, a painful revelation of the possibilities of the utmost dishonor in the high places of the world, & it should be a solemn warning for all as it has been

for myself. Woe to the man who, in trustful ignorance of the treacheries of our race, leaves, for one single moment, his reputation in the power of another - be he peasant or President.

Why is it that you no longer come to Washington? You certainly have not turned your back on the Capitol, the theatre of your past brilliant exploits, & so the seat of your fame. your friends & admirers here are legion, & would rejoice in the privilege of clasping your hand once more. Have you yet entered upon the work of collecting & preparing for publication in permanent form, the speeches, reports, letters &c which would

illustrate your past professional & political career? It is only through such a publication that coming generations can possess themselves of that record of your genius, your learning & your patriotism, now so familiar to your contemporaries. This work is too important to yourself, your family & the country to be left to others. You alone can do it justice. Time passes & there should be no delay. I have personal reasons for my solicitude. Remember, I heard your grand argument on the impeachment of Andrew Johnson, & in my judgment, that speech deserves immortality, quite as much as Cicero's

oration against Verres or that of Sheridan against Warren Hastings. Pardon the earnestness with which I urge this. Your kind wishes, my dear Judge, are most heartily reciprocated. I pray that the vesture of life may continue to rest lightly on you, in despite of the years which are pressing upon us all, & that your evening may be as cloudless as your morn was triumphant.