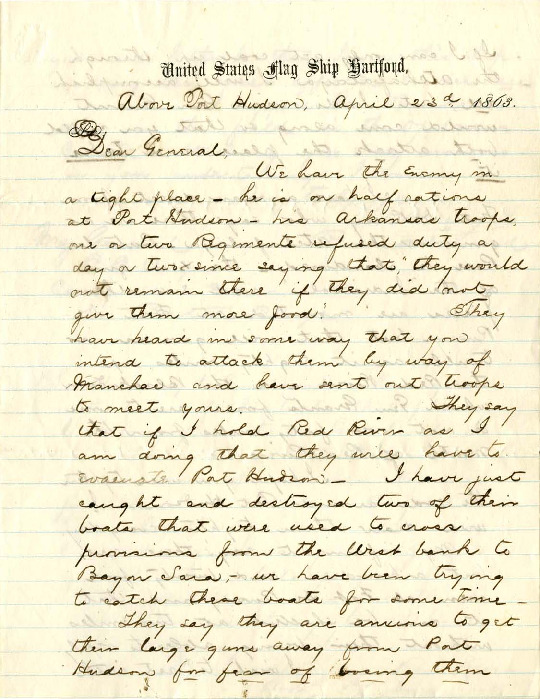 We have the Enemy in a tight place - he is on half rations at Port Hudson - his Arkansas troops one or two Regiments refused duty a day or two since saying that, "they would not remain there if they did not give them more food". They have heard in some way that you intend to attack them by way of Manchac and have sent out troops to meet yours. They say that if I hold Red River as I am doing that they will have to evacuate Port Hudson - I have just caught and destroyed two of their boats that were used to cross provisions from the West bank to Bayou Sara,- we have been trying to catch these boats for some time -

If I can only get coal up through the Atchafalaya I will accomplish all, but I do wish Gen. Grant would come along so that you could both attack the place and take it.

I have a man direct from Fort DeRussy who says these are our guns on the Atchafalaya - Bute la Rose is abandoned - the 1 m gun of the "Indianola" and six other pieces are mounted at Fort DeRussy - but that will give us no trouble as it eighty miles up the Red River and the Black Town which Gen Grants forces are to come is not over forty miles from the mouth of Red River.

I hope you will tighten the cords around Port Hudson. I will draw them tighter every. My informant says there are but a hundred and twenty five men at Fort De Russy and that it can be shelled at two miles without their being able to reply

I wish to act with

P.S. Please say to Gen Banks when you write him if the boats that passed Vicksburg prove to be Gun Boats I will have them at Alexandria by the time he reaches there if possible, but I fear they are Gen Ellet's Squad or Marine Brigade and carry no guns except those belonging to their field artillery, consequently I will have nothing to attack Fort De Russy, as I can not take my own ship up Red River