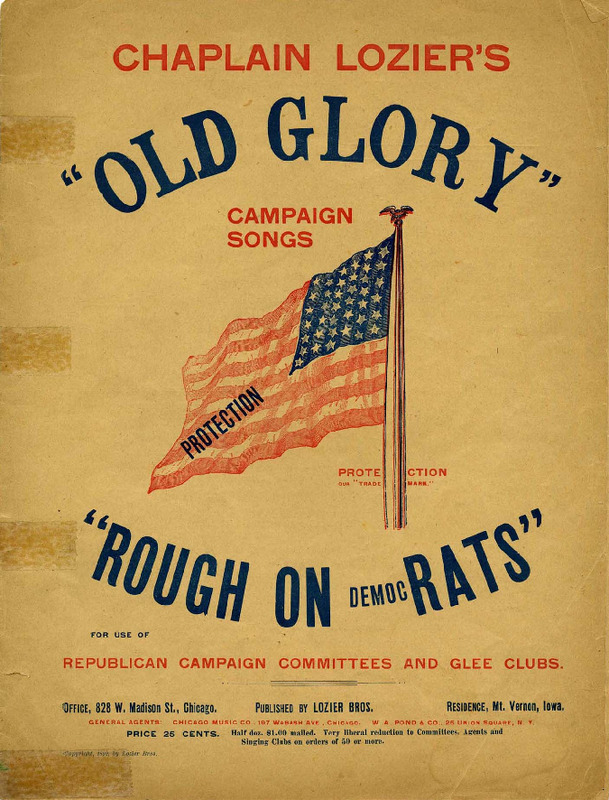 Compilation of Republican campaign songs, including Veterans Hallelujah Chorus; Stand, Patriots, Stand!; Where Am I At; We'll Rally to the Flag; The "Premium" Marching Through Georgia; and Bye, Bye Old Grover.

For the World's Fair, The Great Rock Island Route. TWO GRAND TRAINS DIALY daily between the Foothills and the World's Fair City. One Night Out, or one Day Out. Take your choice. Business Demands it, and the People Must Have it.

For many months to come the eyes of the Civilized World will be turned toward Chicago. Millions of Visitors will flock thither. The "Silver States" that embosom the 'Rockies' and the "Golden States" beyond, will be represented there by their wealth of mines, fields, orchards and vines, as well as of intelligence and beauty.

HAVE YOU HAD CHAPLAIN LOZIER IN YOUR LECTURE COURSE, OR FOR YOUR SOCIETY? If not, send stamp for his Prospectus, giving terms, etc. See the proper committee, or person, and don't rest till you secure him. Estimate no man by the price. Your ablest critics will say Chaplain Lozier's "Old Glory," or "Your Mother's Apron Strings," equals any $100 entertainment you ever had.

The above are good for any Patriotic occasion--Specially Memorial Day, and Soldier's Burial occasions.

"Over The School House That Banner Shall Wave." Song and Chorus, 40 c.

"My Father's Flag and Mine." (National Song of the Sons and Daughters of Veterans). Solo and Chorus, 30 c.

These two are splendid songs for "Flay Day" in our Public Schools.

Usual Discount on above Sheet Music to Teachers and the Trade. CASH WITH ORDER.

1. Fall in, Comrades, "rally once again!" What we won with bullets, our ballots will maintain; We'll "whoop it up" for Harrison from Oregon to Maine, As we go marching on!

Cho.--Glory, glory hallelujah, shout the Loyal and the True, for The Eagle and the Flag downs the Rooster and the Rag, as we go marching on!

2. Sons join your fathers, of soldier blood you're proud: Mothers and daughters will help to swell the crowd; Songs and shouts for Harrison will echo long and loud, As we go marching on!--Cho.

3. Farmers are with us, for they have brains to tell That closing manufactories cuts off their trade as well, The wages of the worker buy the "truck" they have to sell, As we go marching on!--Cho.

4. Laborers are with us, from bench and forge and shop; For they must have Protection, or see their wages drop! If Europe "floods the markets," our Industries must stop! As we go marching on!--Cho.

5. Men who won our victories, and men who "win" their bread, Men who feed the people, and people who are fed, Raise the shout for Harrison and "boom" him right ahead! As we go marching on!--Cho.

2. Our grand Protection they reject, And say it never did protect, If

3. We'll shut and lock Protection's door And let the British Lion roar; He

want to put old Grover back And run Protection off the track.

that be true, we'd like to know What makes old John Bull bellow so?

can't come in without the key, Called Jim Blaine's "Reciprocity."

Then stand Patriots, stand, Protect our glorious land. No

by the brave who fought to save The Union and our Banner.

Queens or Kings or trusts or rings Shall rule this Yankee Nation.

win this mill with McKinley's bill, The next with Bill McKinley.

High-ho! Here we go! To whoop it up for Harrison, *Reid and Co.

Where Am I At? Words by Chaplain LOZIER. Arr. by H. G. LOZIER.

1. We have some "Bourbon" congressmen, Who love to take a spree, and

2. And when "Old Glory" was assailed By treason's maddened crew, Our

3. And when you met, ye war-scarred Braves, On Decoration Day, Upon

when they make a speech they take A shade to much "cold tea." They

"Ben" was there to do and dare, Among the "Boys in Blue." But

on your fallen comrades' graves Your offerings to lay, Where

sweat and swagger, howl and brag, And sip and sip away, And

Grover and his "General," Where were they then? O, where? A

was that fat Ex-President, Who now for votes appeals? The

Where Am I At. Concluded

training with the Copperheads Who fought us in the rear!

soldiers say he went that day A fishing after eels!

Oh! "where am I at?" Can you tell? The Republicans know by the smell! But the

Oh! where were they at? You can tell! But their substitutes fought just as well. For a

Oh! where was he at? Can you tell? While you mourn'd for the heroes fell? When the

first democrat that you meet, ask him that, And the Tammany tiger will yell!

poor substitute is as handy to shoot, Or to run at the first "rebel yell."

fish didn't bite, did he let out his spite By vetoing pensions a "spell?"

We'll Rally to the Flag. Words by the "Silver Chaplain."* Arr. by Ada Lozier Pettyjohn.

1. The bugle call is sounding, we'll rally once again,

2. The "soldier's friends" are they, (if they wore the Rebel gray,)

3. Old Johnny Bull and Grover are yoked together now,

And we'll fight our old enemy oer. And the

As the vetoes of Grover plainly show; For our

To pull down the "fences" of Protection; But the

"Boys" who wore the blue, to their Comrade will be true,

pension bills he killed, and with "Rebs" our places filled,

"sweating sons of the toil" their little scheme will spoil,

We'll Rally to the Flag. Concluded

And he ordered back the flags that didn't go....

By returning "Honest Ben" at next election!

And we'll rally to the flag that down'd the Rebel rag, and then

down'd the "Old Bandanna;" And tried and trusty Ben will

take his seat again, And "that's what's the matter with Hanner."

The "Premium" Marching Through Georgia. Affectionately inscribed to the N.Y. World. Key of B flat.

1. Bring along that Premium you offered for a song;--Something that would help to jog old Grover's cause along: Something that is "catchy" and "taking" too, and strong:--Something like "Marching through Georgia."

Hurrah, hurrah, you want a jubilee, Hurrah, hurrah, John Bull and Tammany! Harrison is pushing you as lively as when he Proudly was marching through Georgia.

2. Here's a song that "catchy" in just about the way That Grover had a "catchy" spell on "Decoration day," While patriots were honoring the "Boys" who whipped the "Gray," While we were marching through Georgia. Cho.

3. Yes, and it is "witty" too; but never once pretends To match the wit that Grover with a veto message blends. It "flashes" like those Rebel Flags we captured from his friends, While we were marching through Georgia. Cho.

4. Send along that "Premium" as quick as you can do 't! And if our song in some respects should happen not to suit, We'll do as he and Adlai did, just "send a Substitute"--While we were marching through Georgia!

4. There are lots of soldiers among the crew, Good-bye, Grover, they're after you! Good-bye, old Grover, good-bye.

The Great Scenic and Historic Route

Threading the Valley of the Potomac. Skirting the rugged "Maryland Heights." Catching a glimpse of the famous "Shenandoah." Halting in historic "Harper's Ferry." Climbing the towering "Cumberlands." Tracing from dizzy heights "Cheat River."

Memorable to the Veterans of the First Battles of the War; and on and on, amid Scenes Unsurpassed and Indiscribable.

TO THE TOURIST, LIFE IS INCOMPLETE WITHOUT A TRIP OVER THE PEERLESS AND PALATIALLY EQUIPPED "B. & O."