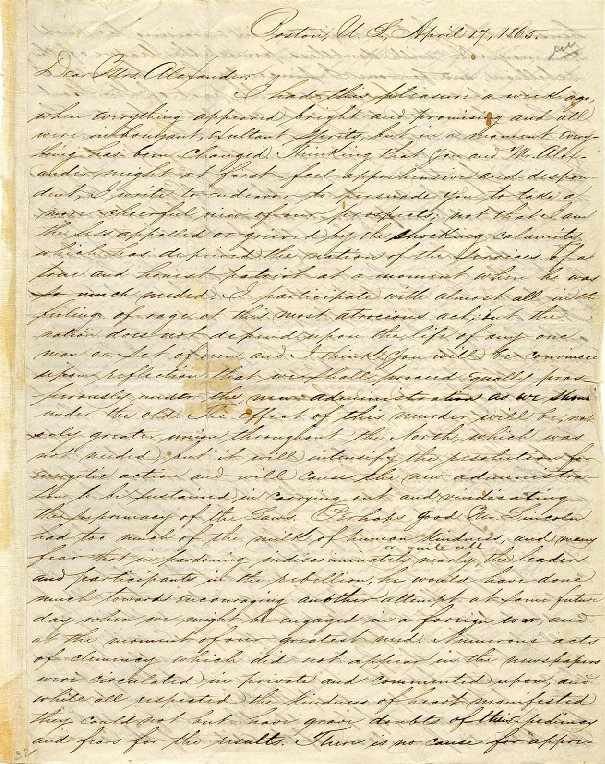 Wealthy Boston merchant Gardner Brewer writes to a "Mrs. Alexander" about Lincoln's assassination and its impact on the nation.

I had this pleasure a week ago, when everything appeared bright and promising and all were in bouyant, exultant spirits, but in a moment everything has been changed. Thinking that you and Mr. Alexander might at first feel apprehensive and despondent, I write to endeavor to persuade you to take a more cheerful view of our prospects; not that I am the less appalled or grieved by the shocking calamity which has deprived the nation of the Services of a true and honest patriot at a moment when he was so much needed. I participate with almost all in the feeling of rage at this most atrocious act; but the nation does not depend upon the life of any one man or set of men and I think you will be convinced upon reflection that we shall proceed equally prosperously under the new administration as we should under the old. The effect of this murder will be, not only greater union throughout the North, which was not needed, but it will intensify the resolution for energetic action and will cause the new administration to be sustained in carrying out and vindicating the supremacy of the Laws. Perhaps good Mr. Lincoln had too much of the milk of human Kindness, and many fear that in pardoning indiscriminately nearly or quite all the leaders and participants in the rebellion, he would have done much toward encouraging another attempt at some future day when we might be engaged in a foreign war, and at the moment of our greatest need. Numerous acts of clemency which did not appear in the newspapers were circulated in private and commented upon, and while all respected the kindness of heart manifested they could not but have grave doubts of their expediency and fears for the results. There is no cause for appre-

hensions that Johnson will err in exercising too much clemency. He will doubtless punish the leaders of the rebellion, and for one I sincerely hope he will. I consider it mistaken mercy on the part of Gen. Grant to have permitted that cold, calculating traitor Lee to escape so easily when he was in his power.

You have doubtless shared in the mortification occasioned by the manner in which Johnson disgraced himself and the Country on the 4th of March. That was a terribly unfortunate accident but it certainly was an accident. I have the best authority for saying that he is not a drunkard. During the last two or three years his troubles and anxieties have been great, and he has taken stimulants, but not to excess. He has now signed the pledge and made a solemn oath that if he is ever intoxicated again he will immediately afterwards resign his position. I have no fears, therefore, of his habits. He is a man of great strength of mind and of course possesses great natural ability, or he never could have obtained his present position. He is much esteemed and respected by those who have been with him a long time in the Senate, and they have no fears so far as his habits are concerned. I admit that it is possible he may err in too great severity, but he will have able advisers in Mr. Seward (if his life is spared as I think it will be,) and others, and I do not believe he will commit any rash or imprudent act, but that on the contrary our affairs, both foreign and domestic, will be conducted with the greatest prudence and skill. You will see the newspapers and therefore I will not comment upon the feeling which universally pervades the Community; but there is one remarkable feature---the most bitter opponents of Mr. Lincoln now deplore his loss even more, if possible, than his friends. Even Mr. Hillard, formerly one of the Editors of the Courier,

who was hissed and not permitted to speak last Monday because he advocated clemency especially for Lee, could not restrain his tears when conversing with my brother on Saturday. To be sure he always was and is a kind hearted man, but it is so universally; the most bitter Copperheads feel as badly as the most staunch Republicans.

You will perceive that, as I predicted last week, Mobile has fallen. Perhaps before you read this, the telegraph will announce to you that Johnson's army has surrendered. At all events this is sure to occur.

The confidence of the community in the change in the head of the Executive is shown by the absence of any change in the unerring thermometer, the gold market.

It will be difficult for you to realize the manifestations of grief. Almost every place of business and dwelling house, no matter how humble, has some emblem of mourning, and the stores and houses of the more wealthy vie with each other in the elaborateness of the display. The only limit seems to be obtaining sufficient black material which is nearly exhausted.

I enclose newspaper slips which I thought you would find interesting supposing you may receive them before newspapers come to hand. Some of which may not meet your eye. I would call your attention particularly to "Corletons" account of the surrender of Lee, and I hope the places named may be found upon your maps.

Your kind note sent through Mr. Wales was received a few days since and he very kindly permitted me to read your exceedingly interesting letter to him. Mrs. Brewer, Carrie and myself feel very grateful for your kind sympathy. You can hardly imagine how deep was our anxiety when it seemed as though we had scarcely any ground for hope. You perhaps may judge how critical the case was when I tell you that Dr Warren visited Mrs. B three

times a day and Dr Holmes every other day in consultation, he having attended her mother and sister as well as his own wife Mrs. Brewer's niece all of whom died of different internal maladies; and Dr Holmes especially took the gloomiest possible view. He not only gave me no encouragement, but so far as it was possible to gain an opinion it was decidedly that he had no hope. Dr Warren on the contrary, in the outset stated his theory, which he always adhered to, and which in the end proved correct, qualifying it however by saying that it was impossible for human sagacity to determine positively the cause. She is now so well as to be able to walk into the next room and sit up three or four hours every day. The first mild pleasant day she is to be carried down stairs to take a short drive. We leave for Newport the middle of June and we hope that by passing a very quiet Summer her health may be perfectly restored.

You may expect a great rush of travellers from this side. Almost every one is going. Nearly all the state rooms in the Steamers are engaged for two or three months. But I must conclude; and with kindest regards to yourself and Mr. Alexander and your daughter I am