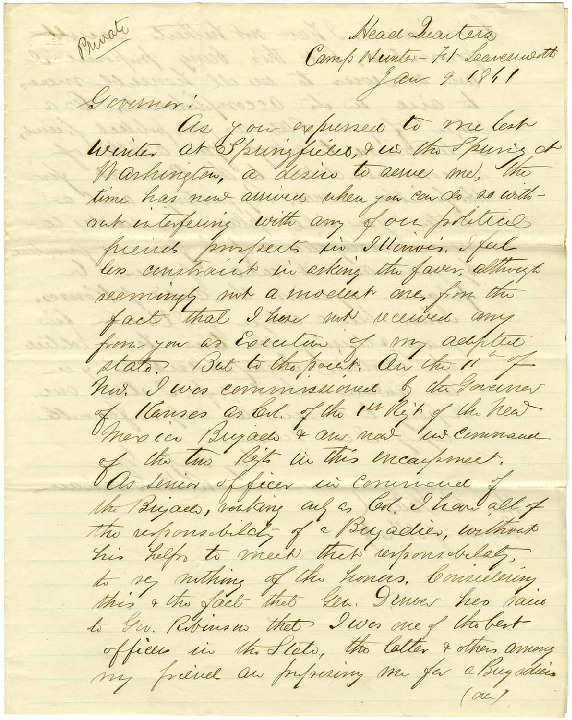 As you expressed to me last winter at Springfield, & in the Spring at Washington, a desire to serve me, the time has now arrived when you can do so without interfering with any of our political friends prospects in Illinois. I feel less constraint in asking the favor, although seemingly not a modest one, from the fat that I have not received any from you as Executive of my adopted state. But to the point. On the 11th of Nov. I was commissioned by the Governor of Kansas as Col. of the 1st Reg't of the New Mexico Brigade & am now in command of the two Reg'ts in this encampment. As Senior Officer in command of the Brigade, working only as Col, I have all of the responsibility of a Brigadier, without his help to meet that responsibility, to say nothing of the honors. Considering this & the fact that Gen. Denver has said to Gen. Robinson that I was one of the best officers in the State, the latter & others among my friends are proposing me for a Brigadier

Commision. I have not hitherto sought promotion, but this being proposed I am anxious to use all honorable means to aid in its accomplishment. As a citizen of your State, as your political friend, I determined to ask of you a letter of recommendation to the President for the position named. By writing such a letter you will place me under renewed obligation & if the favor is granted by promotion it will of course be placed against the credit of Kansas.

I have been a citizen of Illinois for years & during this time have edited the Moline Independent as you are aware, which paper I still own. Hoping to receive an early & favorable reply I am Governor

Requesting a recommendation to the Prest. for appt. of Brig. Genl.