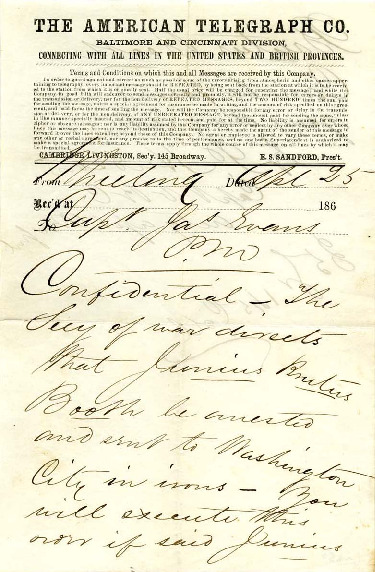 The order states that Junius Booth is to be brought "in irons" to Washington, D. C.

Connecting With All Lines In The United States And British Provinces.

Terms and Conditions on which this and all Messages are received by this Company,

In order to guard against and correct as much as possible some of the errors arising from atmospheric and other causes appertaining to telegraphy, every important message should be REPEATED, by being sent back from the station at which it is to be received to the station from which it is originally sent. Half the usual price will be charged for repeating the message; and while this Company in good faith will endeavor to send messages correctly and promptly, it will not be responsible for errors or delays in the transmission or delivery, nor for the non-delivery of REPEATED MESSAGES, beyond TWO HUNDRED times the sum paid for sending the message, unless a special agreement for insurance be made in writing, and the amount of risk specified on this agreement, and paid for at the time of sending the message. Nor will the Company be responsible for any error or delay in the transmission or delivery, or for the non-delivery, of ANY UNREPEATED MESSAGE, beyond the amount paid for sending the same, unless in like manner specially insured, and amount of risk stated hereon, and paid for at the time. No liability is assumed for errors in cipher or obscure messages; nor is any liability assumed by this Company for any error or neglect by any other Company over whose lines this message may be sent to reach its destination, and this Company is hereby made the agent of the sender of this message to forward it over the lines extending beyond those of this Company. No agent or employee is allowed to vary these terms, or make any other or verbal agreement, nor any promise as to the time of performance, and no one but a Superintendent is authorized to make a special agreement for insurance. These terms apply through the whole course of this message on all lines by which it may be transmitted.

Confidential. The Secy of war directs that Junius Brutus Booth be arrested and sent to Washington City in irons. You will execute this order if said Junius

Brutus Booth Can be found in your district