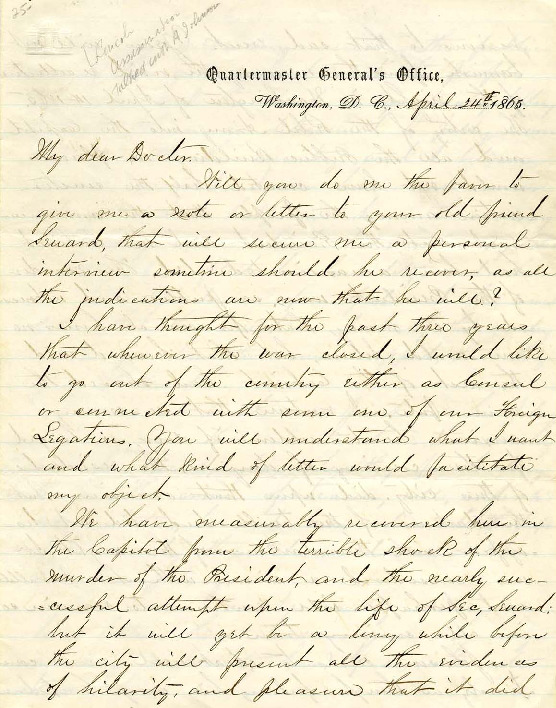 Emory writes to an unnamed doctor, asking for a letter of recommendation to Secretary of State William H. Seward for a consular position. In his letter, Emory discusses the assassination of Abraham Lincoln, the public mood in Washington, D.C., as well as the actions of President Andrew Johnson.

B. B. Emory Letter

talked with A Johnson

Will you do me the favor to give me a note or letter to your old friend Seward, that will secure me a personal interview sometime should he recover, as all the indications are now that he will?

I have thought for the past three years that whenever the war closed, I would like to go out of the country either as Consul or connected with some one of our Foreign Legations. You will understand what I want and what kind of letter would facilitate my object.

We have measurably recovered here in the Capitol from the terrible shock of the murder of the President, and the nearly successful attempt upon the life of Sec, Seward: but it will be a long while before the city will present all the evidences of hilarity, and pleasure that it did

Johnson seems to start well. moves cautiously as though feeling his way. Confidence

There is at least one point in his policy that is more than indicated. this country will be made exceedingly unhealthy for leading traitors. The crime of treason, will, under his administration, be made more odious to the people of this county than it would under Mr Lincolns policy.

But I am unintentionally writing a long letter Can I serve you any way - in any capacity here? If so, intimate to me how.

I have seen two notices of your last Book in the Advocate, but the Book I have not seen. The excitement here has been so intense and constant for a month past that nearly everything else has been overlooked

What can I do in regard to it?

I sent two Confederate Bonds, taken from the Treasury Dept in Richmond, the day our troops entered They are genuine and were brought direct to me by my friend Rev J. K. Vincent of Chicago Ill

If any of your Copperhead friends are in a speculating mood I advise you to sell if they will give the face of the Bonds, The Coupons on one as you see was already signed

Seward is much better,- quite out of danger. but his son is still in a critical condition