Adeline Jay Geo-Karis was born in Tegeas, Greece, on March 29, 1918 and immigrated to the United States as a child. Geo-Karis, who held the rank of Lt. Commander in the U.S. Naval Reserve (R), taught Spanish at the University of Illinois and naval law at Smith College. She was admitted to the Illinois bar in 1942. Her legal career has included practice with the Zion, Illinois law firm of Adeline J. Geo-Karis and Associates as well as legal service for the villages of Mundelein and Vernon Hills, Libertyville Township, and the Long Grove School District. Geo-Karis was the first woman elected as a justice of the peace in Lake County (1949-1961) and appointed as Assistant State’s Attorney of Lake County (1958).

In 1972, Geo-Karis became the first woman elected to the Illinois House by Lake County voters. She was reelected in 1974 and 1976. While in the House, Geo-Karis served as Minority Spokesman for both the Labor and Commerce Committee (1975-1976) and Environment, Energy and Natural Resources Committee (1977-1978). She was also chairman of the Alternate Energy Committee. Her other committee assignments included the following: Cities and Villages (1973-1974), Higher Education (1973-1974), Human Resources (1973-1976), Public Utilities (1973-1976), and Veterans’ Affairs, Registration and Regulation (1977-1978). Geo-Karis served as vice-chairman of the Illinois Energy Resources Commission from 1975 to 1976 and, from 1973 to 1974, as chairman of the Interim Study Committee, which studied acupuncture, death with dignity, underage blood donors, and funeral expenses. She was also a member of the Illinois Legislative Council (1973-1974), Rape Study Commission (1973-1974), Dangerous Drugs Advisory Council (1973-1974), Illinois Committee to the Illinois Board of Aeronautics (1973-1974), and Nuclear Safety Committee, Consumer’s Coordinating Council, and Gasohol Task Force.

Geo-Karis was a member of the Board of Governors of the Lake County Bar Association. She also served on the board of directors of the Easter Seal Society of Lake County, Lakeview Girl Scout Council, and Midwest Drug Prevention Program (1973-1974). Besides being a member of St. Demetrios Church in Waukegan, Geo-Karis was a national president of the Daughters of Penelope. In addition to membership in the American Business woman’s Association and Altrusa, she belonged to the League of Women Voters and was president of the Thirteenth Congressional District Republican Women’s Club. During Zion Jubilee Days in 1974, Geo-Karis, a member of the Zion Historical Society, was the observance’s general chairman.

The resource record for the Adeline J. Geo-Karis Papers (BC239) at the Abraham Lincoln Presidential Library and Museum may be found at https://illinoisstaff.as.atlas-sys.com/resources/348#tree::resource_348.

Photographs in this collection include images of Adeline J. Geo-Karis during her time in the Illinois House of Representatives and Illinois Senate. 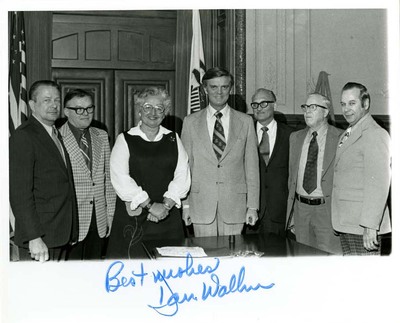 Adeline Geo-Karis, Governor Daniel Walker, and several unidentified men stand at the end of a table and pose for a portrati. 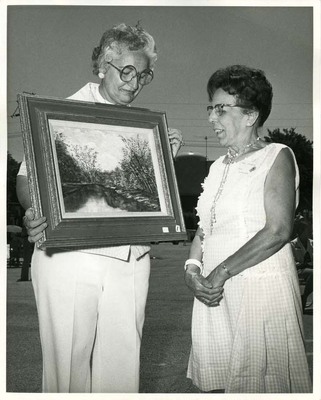 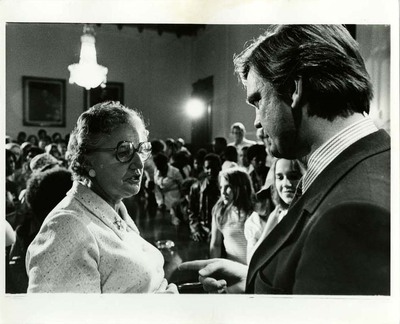 Senator Adeline Geo-Karis and Governor Daniel Walker speak to each other while a group of students stand behind them. 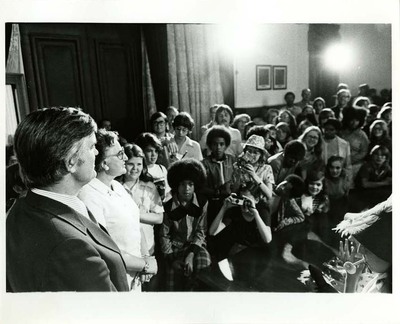 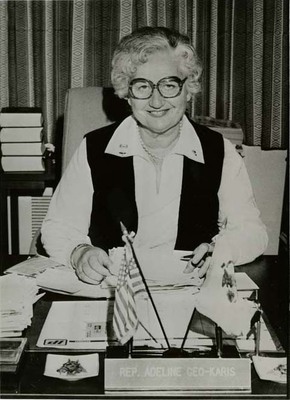 Representative Adeline Geo-Karis poses for a photograph while working at her desk. 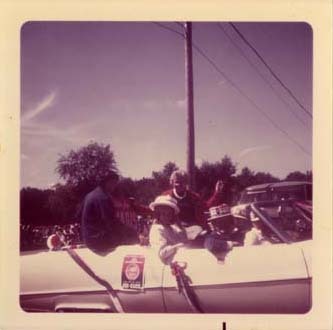 Adeline Geo-Karis sits on the back of a convertible waving at an unidentified parade crowd.

Adeline Geo-Karis with Man and Woman at Illinois Capitol 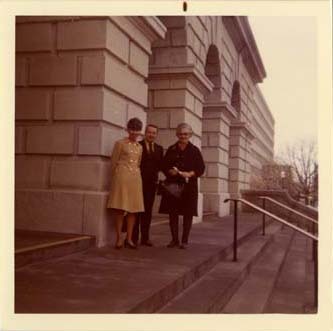 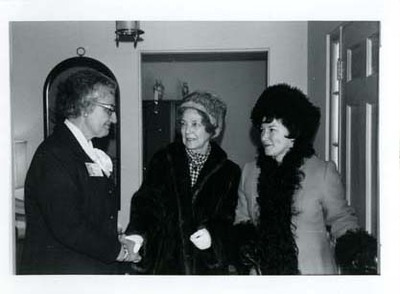 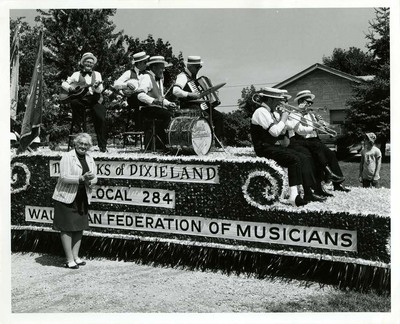 Adeline Geo-Karis stands next to a seven-piece band sitting on a parade float sponsored by the Waukegan Federation of Musicians Local 284. 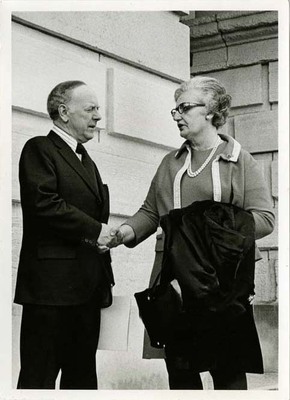 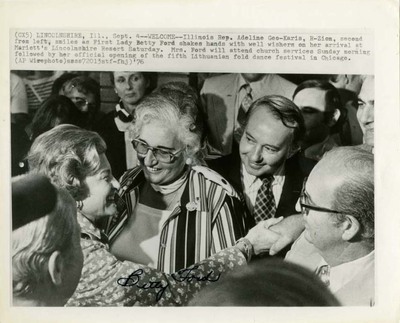 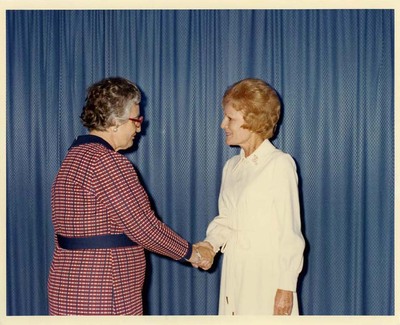