Freedom and Glory: A Song for the Army and Navy 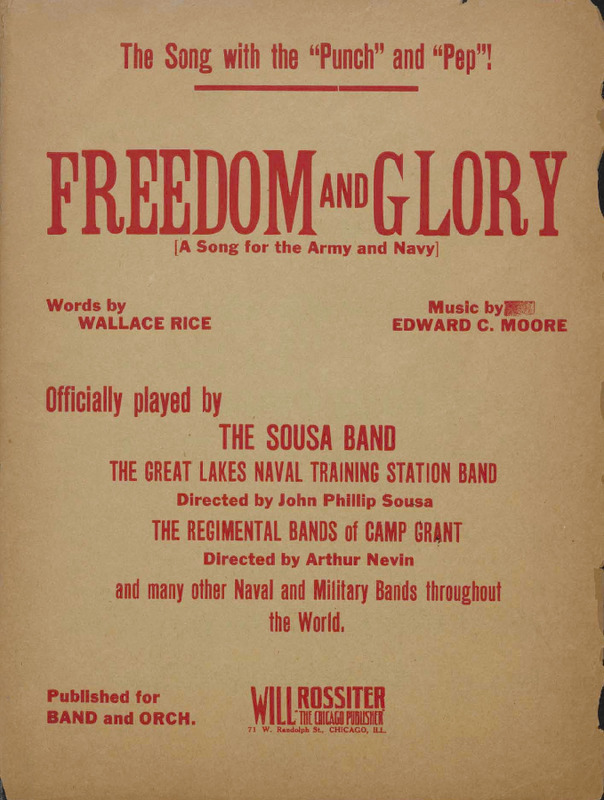 Freedom and Glory: A Song for the Army and Navy

Lyrics depict battles and roles of the Army and Navy. "Dedication, by permission, to Captain William A. Moffett, U.S.N."

FREEDOM AND GLORY (A Song for the Army and Navy)

Officially played by THE SOUSA BAND

THE REGIMENTAL BANDS OF CAMP GRANT

Directed by Arthur Nevin and many other Naval and Military Bands throughout the World.

Published for BAND and ORCH.

Dedicated, by permission, to Captain William A. Moffett, U.S.N.

Freedom and Glory A Song for the Army and Navy

We are sons of the land that freed Men and nations in crying need: Now on we speed to prove by deed New faith in our old story. Off to France and the growl of wars, On to batter the tyrants bars; Vowed to take the stripes and stars to unstained glory.

Men like us were with Washington, Our own kind saw that Jackson won, And Mexico was left undone By men of our same manner; Men like us were Grant and Lee, Stonewall, Sheridan, Meade maybe: Theirs the flag set Cuba free, our starbright banner.

Men like us were with bold John Paul Our own kind ran to Preble's call, Decatur, Lawrence, Perry all Who make the nation glorious; David Farragut shared their fame, Dewey fought with the same clear aim: Their old flag we'll keep aflame and still victorious.

Freedom! Glory! off to war are we To

Freedom! Glory! join the great advance and bear a lance to fight for France and glory.